Ben Tuck endured perhaps the most challenging weekend of his career so far at Croft in Yorkshire last weekend, with engine and tyre problems compounded by changeable weather and reduced team support.

But with a huge effort, Ben recovered to take 9th, 4th and 5th places at the triple header to set up his title challenge at the last round at Donington in 4 weeks time as he tops the total points table and sits 4th on drop scores.

The weekend kicked off in difficult circumstances with an engine problem and a puncture during testing. With reduced team support at this meeting, the problem was solved again with the help of his championship rivals, however he struggled to find a working setup on the car.

Heading into qualifying, the changeable weather delivered up a wet track. With normal business resumed, Ben pushed hard with all three of his fastest laps quicker than the next fastest driver in the session, good enough for a front row. However in a cruel turn, Ben had to accept a 10 place grid penalty stemming from contact made at Oulton Park 2 weeks earlier, relegating him to 12th.

No stranger to hard charges up the field after his 18 place ascent at Spa the previous week, Ben lined up ready to carve his way through the pack. But fate again had other ideas. Moments before heading out onto track a thunderstorm deposited a huge downpour. Most of the grid frantically reconfigured their cars on wet rubber and setups but with a pit crew limited to one man, Ben could not complete this in time, so to protect against having to start from the pit lane, Ben remained on his dry tyres.

Ben valiantly wrestled his wayward car around the track and even managed to climb 3 places to 9th by the flag. 9th position was a huge disappointment and matched his lowest finishing position all year.

Sunday saw the final 2 races of the meeting, thankfully in drier weather. In Race 2 Ben was able to fight his way up to 4th and engaged in a tough battle for the podium.

Still coping with a slightly unbalanced car, Ben was firmly aiming for a win in Race 3. Fate intervened yet again, when he was hit heavily from the side in lap 1 and bounced across the grass into 8th position. Thus yet another fight back was launched, and over the next few laps, Ben clawed his way back to 3rd and made a bid for 2nd. One more twist of fate befell Ben as he made an uncharacteristic mistake under braking which took him down to 6th on the last lap. Still fully fired up, Ben remounted his charge and took 5th before the end of the race cut short his comeback.

In a drama filled and difficult weekend Ben had to dig deep into his personal reserves of strength to keep pushing and was rewarded with taking top slot in the Championship points, 4th on adjusted scores and still with every chance af taking the title in 4 weeks time at the Championship decider at Donington Park.

Good results at Donington will see Ben achieving his objective of a top 3 championship position, and there is still the possibility of taking the title itself. With such an impressive performance in his first full season in cars, Ben is in good shape to carry the momentum forward to his next goal of GT racing. With such potential, Ben is now looking for commercial partners and sponsors to share the benefits of such a move. 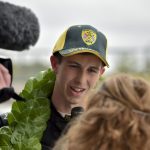