TUCK FIGHTS BACK TO PODIUM IN PHOTO FINISH THRILLER!

Ben Tuck pulled off an epic result at Brands Hatch at the weekend in the penultimate round of the British GT Championship, moving himself and his partner, Ben Green up to 2nd in the GT4 Drivers Championship and triggering a title decider for the season finale at Donington in 6 weeks time. After another Safety Car period annulled a convincing lead Green had built up in the first half of the race, Tuck fought back from a distant 6th place to take a superb 2nd in a thrilling last lap race for the line, in one of the most exciting races of the season. Another blazing hot English summer weekend served up sizzling action right from lights out on Saturday as the Century Motorsport BMW M4 GT4’s dominated qualifying. In the first session Tuck’s partner, Ben Green, swapped leading times with his Century team mate, new comer Dean McDonald in the sister #43 BMW, losing out by only one hundredths of a second at the flag. The second nail biting qualifying session mirrored the first as Ben Tuck and Jack Mitchell pushed their BMW’s to the limit. By the flag they were separated by just nine thousandths of a second placing Tuck and Green in second place just two hundredths of a second behind their team mates in an all BMW front row lockout.

However, the sister #43 BMW was no threat in the race due to a 20 second time penalty they would need to serve in the pits. The signs were hopeful for a second season victory for Tuck and Green.

Under sweltering skies, lights out on Sunday saw Green execute the perfect start to get the jump on the sister BMW, enabling him to begin to build a convincing lead, providing a buffer over the Pro/Am class cars destined to have a shorter pit stop. But the Safety Car was called out 22 laps into the race instantly dissolving their lead. A second Safety Car period soon after following a huge shunt on the Start/Finish straight put paid to any chance of building another lead. During the driver change and refuelling stop, several Pro/Am cars benefited from their minimum allowed stop times, shorter by 30 seconds to exit the pits ahead of the BMW, now with Tuck behind the wheel.  Exiting in 8th, he immediately took his first place and as the positions shook out after all the stops were completed Tuck found himself a very distant 5th position behind the leaders, with seemingly little hope of regaining the lead in the single hour remaining.

However, Tuck had other ideas and set about an epic charge, hunting them down with metronomic consistency, setting a fastest lap along the way (only beaten by a tenth of a second later in the race). As the time ticked away, Ben reeled in the first of the top four and 7 laps later he was ready to pounce taking 4th place with little fuss.

With a podium now beckoning, Tuck charged on to try to close a huge gap to the top three. After an unstoppable 35 minute charge he zeroed in on the leading trio. With time and laps almost depleted, Ben had just 2 laps to claw back a podium. Wasting no time he swiftly dispatched a Mercedes in third place to recover an incredible podium spot. Living by the credo of ‘Never Give Up’, Ben had second place in his sights on the final lap. As the cars emerged from the wooded GP loop and on to the final straight for the last time, Ben pulled off a spectacular move to dummy the 2nd place Nissan and slingshot past on the exit of the final corner, two wheels kicking up dust on the grass in a stunning final sprint to the line taking the place by inches. 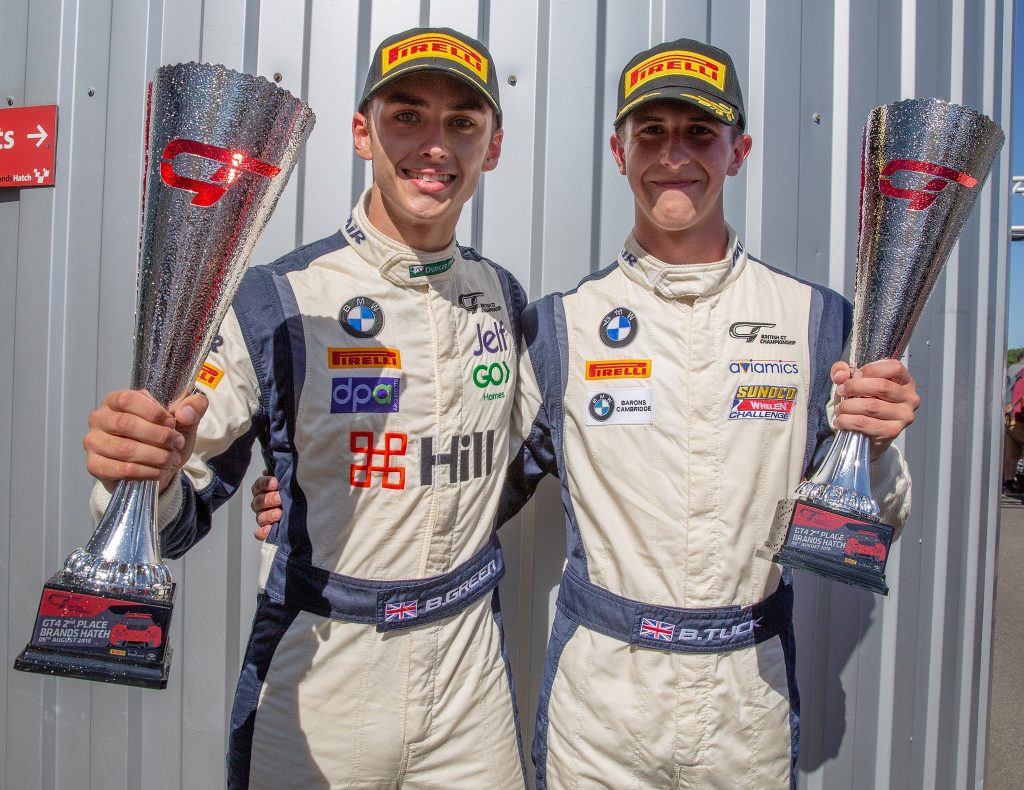 Tuck’s mesmerising drive against seemingly insurmountable odds was the hardest he’d ever driven. “That result is one of the most satisfying of my career so far” he said. “Even though it wasn’t for the win, I put absolutely everything I had into that! The M4 is just a mega car, it held up fantastically, it kept its balance all the way through as the tyres wore and I had absolute confidence in it all the way. BMW have built an incredible machine and Century did an absolutely perfect pit stop. I’m so happy we got this result back. Ben [Green] did a brilliant first stint exactly to plan and I just thought ‘not again!’ when the Safety Car came out. But I had confidence that I could push at the maximum for the whole stint and get back up there.”

The result was delivered in front of a large crowd of sponsors and supporters for both BMW drivers. “We’ve both got lots of people here today” said Ben. “It’s great for me to be able to repay the faith of Aviamics, Trafalgar, Saturn, and Vireal Media, who are all here as well as Barons BMW Cambridge, MotorsportDays.com, Engine Room and Bamb.”

The result moves Tuck and Green into 2nd position in the GT4 Drivers Championship, just 10 points behind Century team mate Jack Mitchell, meaning that Century and BMW are in line to scoop both teams and drivers titles and giving the tantalising prospect of an all BMW shootout for the Championship.

Ben’s next race is the British GT Championship decider at Donington on 23rd September 2018.