The 24 Hours of Nurburgring is widely recognised as one of the toughest endurance motor racing events in the world. Whilst it’s more famous cousin, the 24 Hours of Le Mans following close on its heels in the motorsport calendar takes much of the limelight, the demanding and unforgiving nature of the Nurburgring together with its notoriously unpredictable weather means that it stands alone as the ultimate challenge to driver and machine. And so it proved to be in 2022. Whilst the weather this year largely behaved itself, the attrition list contained some of the biggest names in the racing world. However, through it all BRDC SuperStar driver Ben Tuck and his crew survived the full 24 hours, bringing home the sole surviving BMW GT3 to still be rolling.

Coming from a technical retirement at the preceding qualifier races 3 weeks earlier, the omens were for an uphill battle at the daunting 24Hr race for the 4-man Walkenhorst Motorsport crew, led by Bedfordshire’s Ben Tuck. The epic weekend at the notorious Nordschleife circuit is famous for the party atmosphere brought by more than 100,000 fans camping in the picturesque Eiffel mountains to enjoy 4 days of action including no less than 5 qualifying sessions as well as several support races a fairground, live music and fireworks.

As part of the premier class, the weekend really started for Ben’s Walkenhorst crew in the final ‘top qualifying’ session on Friday evening. As with the earlier qualifying races, it was a rare chance for the very fastest drivers to drive the Nordschleife unhindered by traffic or incidents on two precious solo laps. By the end of the sessions, Ben had piloted the #102 Alpecin liveried BMW M4 GT3 to 18th on the starting grid.

With 24 hours of gruelling battle stretching out ahead, and under unusually calm skies, the big race started at exactly 3pm UK time on Saturday afternoon with Ben at the wheel. Almost immediately, trouble found his #102 car when an engine problem developed, holding back the potential of the Walkenhorst BMW. In as little as 4 laps Ben had tumbled down to 26th position where, after the busy opening battles, he managed to stabilise his position and begin a valiant fight back, posting lap times quicker than the front runners.

After handing the car over to the rest of his crew, ex-BMW pro driver Jörg Müller, Jörn Schmidt-Staade and Mario von Bohlen, Ben again took to the track for a 15-lap stint later that evening. As the BRDC SuperStar drove into the closing darkness, he began to post lap times comparable to the front runners, particularly impressive in the context of the technical problem still burdening his BMW, eventually bringing the car back safely in 20th position.

The early morning was Ben’s next duty and as he readied himself in the dim light of the dawn, news arrived that the car had been involved in a collision. It arrived minutes later, and the team got to work making repairs. Miraculously, 90 minutes later Ben tested the car on track in an 8-lap stint where he moved up to 18th position.

Despite the technical issues and damage, the battered #102 car soldiered on as Ben took the wheel for his final duty in the late morning of the second day. During the stint, the team recalled the car to the pits for checks of the damage, but this conservative approach paid dividends as Ben felt confident enough in the car to push the car to its fastest lap of the race. Ben eventually handed the car over to his teammates with just 3 hours to go in 18th position, in which it remained until the chequered flag claiming the honour of being the only BMW GT3 car running. Post-race the position was upgraded to 15th after retired cars ahead were removed from the final standings.

The race did not feature much in the way of weather related drama’s as it had done in recent years, and Ben remained positive at the outcome. “For sure we were carrying a technical issue the whole weekend, but as a team we managed the whole race carefully and so we’re proud to have brought home the only BMW GT3 still running at the end. It was frustrating in the early phases as we could not battle and we were picked off easily along the straight, but this year it was much more about careful management of the car rather than the tactical battles in the race. So, it was a different kind of race this year, but as always good experience”.

The 2022 24Hrs of Nurburgring didn’t deliver Ben Tuck an opportunity to show his pace, however it demanded a wise head, patience and teamwork, attributes that are just as important in endurance motorsport.

Ben now turns his attention back to the Nurburgring Langstrecken Serie (NLS) for round 4 on 25th June 2022. 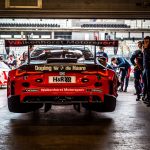