DNF AFTER INCIDENT AT 12HR RACE

After the highs of snatching a miraculous podium at a dramatic and incident filled race in July, the next instalment of the Nurburgring Langstreken Serie (NLS) could not have been more different earlier this month for Bedfordshire’s BRDC Superstar GT driver, Ben Tuck. The end of the long summer break seemed to have swept aside the warm sunny weather and along with it delivered an unwelcome dose of bitter disappointment. After just a few hours into the race and with very unpredictable weather hampering progress, a seemingly innocuous departure from the track rendered Ben’s car unable to continue in the race.

For the second time this season, Ben was drafted into the Pro car line up in the #34 Walkenhorst Motorsport BMW alongside Christian Krognes and Sammi Matti Trogen. The autumnal weather made its presence felt in a chaotic Friday practice session. With rapidly moving rain showers regularly dousing parts of the 15-mile-long lap, the competitors had to cope with continually changing conditions ranging from bone dry to driving rain. The conditions showed how important it was to have equipment that could cope with the extreme variability in conditions and after a frustrating day the team looked towards race day in the hope of better conditions.

Eventually they were rewarded, though not until after a nail-biting qualifying session in which changeable conditions eventually gave way to a brief window of dry track all the way around the lap. With characteristic commitment, Christian Krognes used the Yokohama tyres to their maximum effect on the dry surface to blast the car onto the front row of the grid.

Having optimised their grid position, attention turned to the race just a few hours later. Knowing from races earlier in the year that their dry weather slick tyres are vulnerable in damp conditions, the team left the tyre choice up until the very last moments, eventually changing to slick tyres on the grid. As the field moved away for the 20-minute-long formation lap, rain began to fall on parts of the circuit and the team had to make the impossible judgment of when, or if, to pit for rain tyres. As the race got underway, they elected to stay out hoping to survive the wet parts to take advantage of the dry sections.

However, the strategy looked doomed when the car became almost unmanageable on the wet sections and Krognes tumbled down the order to 28th position prompting the team to pit the next lap for wet tyres. For the next few hours Krognes gradually worked his way back up the order as the conditions dried out eventually reaching 8th position by the time Ben was ready to take over the wheel. With conditions favouring the slick tyres, Ben raced out of the pits into 6th position looking to make gains. However, within less than a lap another downpour drenched one half of the circuit. The team gambled and remained on the slick tyre as Ben started a second tentative lap. As he encountered the damp sections, the tyres again lost all performance and Ben slowed to a snail’s pace. At one point the car slowly slithered off the track and glanced the barrier. But on re-joining the track it was evident that even though the contact was very light, fatal damage had been done to the rear suspension and he had to retire the car.

The impact was in stark contrast to the massive collision suffered by the same car at the last race when it slammed side-on into the barriers after hitting oil on the track, lifting it into the air, after which the car continued with no damage to a podium finish.

“I’m absolutely gutted for the team” Ben said. “These are exactly the sort of challenges that the Nurburgring throws at a you as a driver, the team and the tyres, which is why it’s the best track in the world to test yourself against”.

The team can’t help but feel disappointed with a retirement after such a light impact. However, the next race presents another opportunity on 8th October. 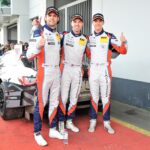