Almost exactly 12 months to the day after he took his very first GT3 win at the legendary Nurburgring Nordschleife during his debut GT3 season, Bedfordshire’s BRDC SuperStar GT Endurance driver, Ben Tuck, has returned to the podium after an action packed and incident filled 6-hour race at Germany’s notorious circuit high in the Eiffel mountains. After starting in pole position, Ben and his crewmates endured fierce battles, a potentially race ending crash and a spin to bring the car home in an incredible 3rd place.

Last weekend’s result in the latest round of the German endurance racing Nurburgring Langstrecken Serie (NLS) Championship was a hard won but certainly welcome finish for the crew of the Walkenhorst Motorsport run #34 BMW M4 GT3 car, and in particular Ben Tuck, who had swapped from his regular mount in the sister #35 car for this race.

Returning to the #34 car, Ben re-joined former crewmate, Norwegian Nurburgring expert Christian Krognes and new for 2022, Spanish ex-Bentley factory driver Andy Soucek. The trio created a formidable force and hopes were high to take the spoils in the longest NLS race so far this season.

The weekend got off to a positive start in testing, with Ben doing several laps to gain familiarity with his new mount. As he settled in, the lap times tumbled and the session progressed according to the run plan, setting the stage for maximum effort in qualifying.

Race day dawned with good weather and qualifying kicked off in spectacular fashion with most of the session given over to Nurburgring lap record holder Krognes. Making the best of the conditions and traffic, Krognes immediately blasted in two lightning laps, the second of which held the pole position time for the remainder of the 90-minute session.

With the grid position settled, it fell to Ben Tuck to start the race for the initial stint just 2 hours later. Leading 15 aggressive GT3’s off the line, Ben came under attack and was immediately plunged into a battle. Having been set up to perfection by the Walkenhorst team, Ben took advantage of the big BMW’s superior handling to fight among the front runners until, some 20km after the start, the leaders reached the long straight, where the #34 car revealed a weakness in top speed and Ben lost ground to his adversaries in the closely packed leading group. In each of the following laps the pattern was repeated, and Ben slipped down the order.

After 6 laps, Ben was called in to the pits still closely fighting the leading pack in 5th position to make the team’s first driver change and refuelling stop. Looking on from the sidelines Ben watched as, on lap 17 disaster struck. The Walkenhorst BMW was 2nd in the leading trio of cars, separated by just fractions of a second, when they all drove through the same patch of oil that was left on the track by a backmarker. With Soucek at the wheel, the #34 BMW slid off the track and clattered into the barriers. After managing to restart the car, he found that he could still run and re-joined the race down in 5th position having lost over a minute in time.

With the battered BMW continuing to hold together, Soucek handed the car over to Krognes for the final push, who fought an epic battle, for 3rd and then 2nd position for the next dozen laps. The drama was not over, however when, in the last gasps of the race and chasing 2nd position, Krognes spun. Incredibly the car remained on the track, gracefully pirouetting a full 360 degrees before continuing on its way without losing a place. The departure was the final chapter in the story and with 2nd position now out of reach, the #34 Walkenhorst BMW came home for a hard-won podium position.

“What a race!” exclaimed Ben. “We had our work cut out today to use the BMW’s handling to offset the performance on the straight. The car was solid, and the team were spot on all race, and it was looking so good until the leader’s engine blew right in front of Andy. I thought it was all over, but we saw the car was still OK amazingly! And then we managed to get in the battle for 2nd and Christian just lost the car but held on for 3rd! That was hard work, but I’m so glad to be able to come back to the #34 car and be part of another podium a year after we got the win”.

“I’m probably going to be back in the #35 for the next race, but hopefully I’ll get to drive the #34 again soon!” said Ben. The NLS season now pauses for a long summer break before returning on September 10th. 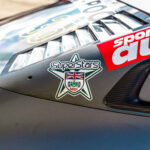 SUPERB FIGHT BACK AFTER EARLY TECHNICAL PROBLEMS AT NLS4!Race Reports