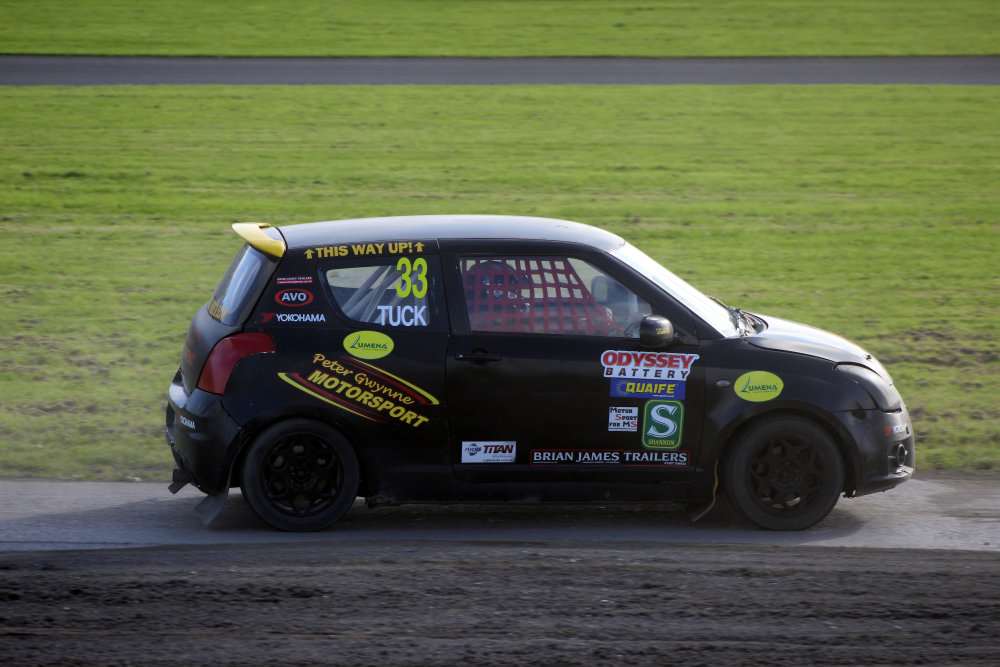 As he chased down the car in front, the windscreen was battered by a huge wave of muddy water thrown up from the sodden ground, which immediately became smeared by the wipers obscuring any view out of the front. It was a good job then, that 2015 RSF MSA Young Driver of the Year Ben Tuck was looking out of the side window as he slid his Swift Sport Rallycross car sideways through the corner in a desperate effort to close the gap on the car in front ready to make a move on the next tarmac section.

His situation could hardly have been more different from the previously time he piloted a race car. Two weeks earlier he took his skittish, real wheel drive, open topped Caterham Supersport to an emphatic victory under warm sunny skies at Croft after a 19 lap race lasting half an hour. Now he was splashing his way through the Welsh mud in rain and zero visibility, his front wheels fighting for traction in 6 lap battle for the honours. After 3 heats and a semi final, Ben found himself in the Swift Sport Rallycross final against five of the championship’s top drivers.

Thanks to Lumena Lights Ltd and Peter Gwynne Motorsport, Ben was taking part in his first ever Rallycross event after being chosen as the winner of the Lumena Lights drive at the Pembrey Round of the British Rallycross Championship in September. “It was a huge honour to be chosen for this, its great challenge and perfect for my development” said Ben. “Competing in something so different from my normal racing really brings out the need to adapt, think and learn quickly. The type of car, the surface and even the style of racing is so different, that you’ve got to work really hard to be competitive”.

The Suzuki Swift Rallycross Championship is run by Peter Gwynne Motorsport, who administer the series, and provide full technical support and hospitality to the championship as well as running a few drivers themselves. The single make championship has junior and senior divisions and is designed to be a cost effective launch pad for Rallycross racers. Over the past 6 years the Championship has gained a high level of respect, with equally matched robust cars, close exciting racing and affordable costs.

Ben’s first introduction to the car was in the pouring rain early on race day. The squat little matt black rally car, complete with Ben’s 2015 race number – 3,  had been humorously adorned with “This way up!” stickers by the team, hopefully not a portent of things to come! After a seat fitting, it was clear that visibility in the car was much more restricted than his Caterham, with a very upright seating position and a big steering wheel and a safety net, which stretched across the driver’s side window effectively blocking the view to the side mirror.

The car rested on surprisingly smooth Yokohama control tyres, much like the cut slick Avons on his Caterham. These were not the knobbly rally tyres that were expected, and hinted at the fact that Swift Rallycross racing is all about value for money and driver talent with the same tyre being used come rain or shine, requiring a deft feel for changing grip levels. “This is going to be about reacting quickly, keeping it pinned and maintaining momentum” Ben remarked.

Drivers briefing revealed a different format to the event than the track racing Ben is used to. Rallycross is competed in a similar way to karting, with heats, a semi final and a final. For the first heat the grid positions are allocated at random, the next 2 are dictated by the finishing positions of the previous heats. Importantly, semi final positions are selected by fastest total race time in a heat, rewarding consistency. This means that it would sometimes be better to avoid a hammer and tongs race long battle which may produce a win but ultimately slow the pace. The 8 grid slots for the Final are decided on the finishing positions in the semi’s. 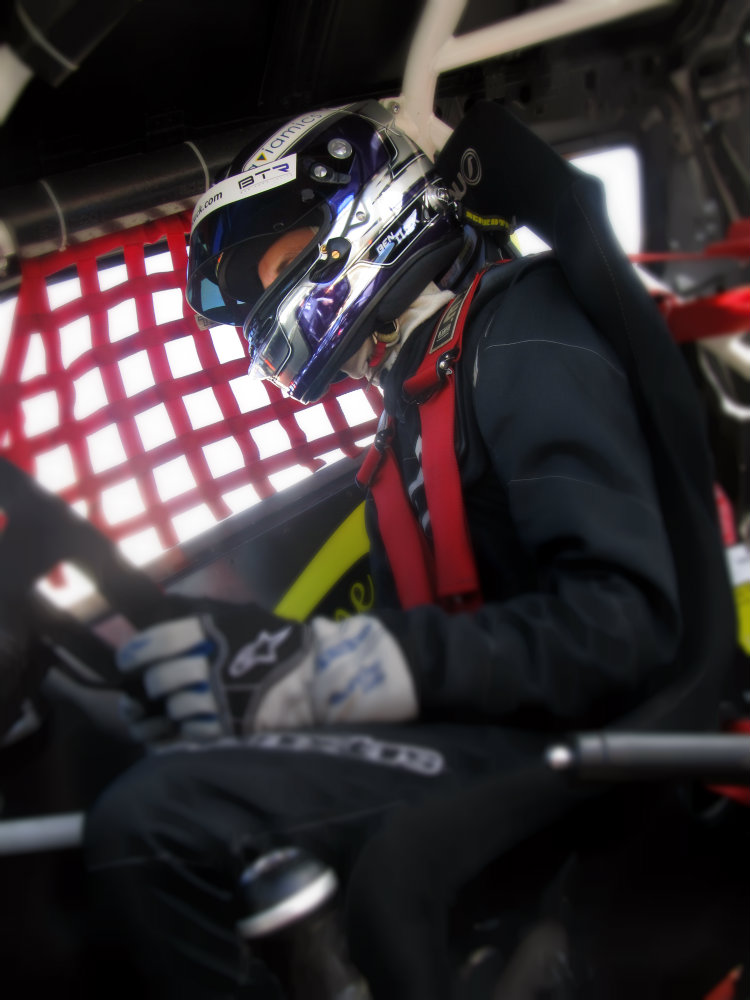 As a Rallycross novice, Ben would begin his first heat from the back after completing some sighting laps to get a first taste of the car and the soggy South Wales circuit. Drivers briefing also came with a pleasant surprise. “Everybody is so friendly” Ben reported. Many of the Swift Championship drivers happily introduced themselves, wished Ben good luck and were happy to pass on advice and tips. It was clear that the focus of Rallycross and of the Swift Championship in particular is great fun high quality racing, which has resulted in a superb sense of camaraderie in the paddock. Not that that’s limited to just the Swifts. The big guys in the British Championship with their 500+hp super car monsters were equally willing to help out.

Never one to make things easy for himself, Ben’s first Heat was run in very wet and challenging conditions. Visibility was the first big problem. As soon as the dirt section was hit, mud and filthy water was caked across the car, eliminating visibility through the rear window and reducing the visibility out of the front and side windows. “You just have to develop a kind of sixth sense of what’s around you. You can’t see out of the mirrors at all so if someone was to make a lunge up the inside it would be hard to see them coming. It looks like the way to overtake is to find the traction out of the corners rather than into the braking zones as we do on the track. The surface is different every inch of the circuit and on every lap it changes as puddles get emptied, and mud gets sprayed all over the place. You don’t have a consistent feel for exactly how much grip you’re going to have at any point, you just have to react at the time. Car control is so important but the adjustments you’re making to the car are massive compared with the Caterham where it’s all about smooth small inputs and finely balancing your weight transfer and rotation. Here you really have to react with big handfuls of steering and throttle to swing the weight around, get the slides on and keep up the momentum.”

Then of course there was the challenge of front wheel drive. Ben’s entire career has been in rear wheel drive machines, from karts via Mazda sportscars up to his Caterham Supersport. “Out of everything, that was probably the hardest to get used to. Everything is upside down in terms of driving quick. It took a couple of heats to get used to hammering the power and steering with understeer. It was tricky to get the fronts to dig in properly to get rotation so the lines were important to maximise the grippier bits of the surface. Of course on the next lap it would all be different!”.  As the day went on and the circuit dried it became easier to find front end grip and Ben became more confident.

“The morning was a pretty tough introduction to front wheel drive. There was just no front end grip at all, I was even trying a yank on the handbrake to get some back end slide but the conditions wouldn’t have it. But once it dried out a bit I could get the car swinging around its front axle more like a pendulum. It’s a really different technique, but brilliant practice to get the brain working!”

By lunchtime the day had dried and Ben had done well enough for a mid pack slot in the second Semi final. Throughout the day his team mates in the Peter Gwynne awning and his fellow Swift drivers were regularly popping past to chat and offer advice. “It’s been an amazing welcome, we really feel part of the team and the championship already and we’ve met some great drivers. All their advice is great and I really appreciate it, and the hospitality is brilliant”. 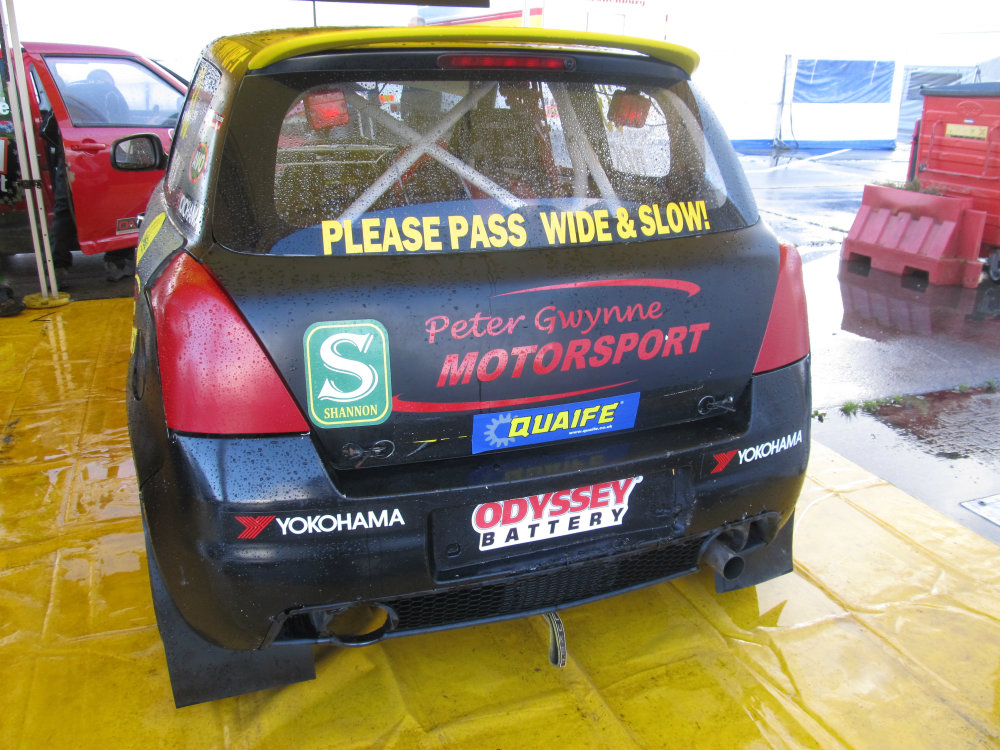 Of course there were sections of the circuit where Ben was more at home. Any losses he was making in the dirt sectors he was able to make up on the tarmac, particularly in the braking zones. “The Swift is a great little car, on the solid stuff, I got a good feel for the brakes so I could push deeper into the braking zones. I was surprised at the amount of grip the Yokohama’s give on the tarmac so I could use a little bit of experience there to get a few positions”. On the loose, I tried a few moves but the front end grip on the dirt always sent me wide. But trying a move on someone going sideways round the outside is such a lot of fun!”

The semi-final netted Ben a creditable 4th position – good enough for the final. “I knew it would be a tough challenge and I wanted to reward Lumena Lights and Peter Gwynne with a good result. I knew that you’ve got to be a great all-round driver to do well in Rallycross so I was up against some really good guys! It was better once it had dried out a bit and I was able to get a good handle on the car. Getting into the final was the target so I’m happy!”

The format of Rallycross makes the races short and snappy. “In Caterham’s the races are half an hour long so there is a bit of strategy around how the tyres come on, how to manage them and also positioning. The tow is important so you have to work out where your opponents are struggling and make a move using the draft to best effect without giving them the same opportunity in return. In this there’s none of that, it’s a 10 minute punch up from lights out (well lights ON in Rallycross!) and you’ve got to get your moves done fast. It rewards quick thinking and opportunistic driving, and it’s all over before you know it! ”

Ben went on to take 6th in the Final, a respectable finish for his Rallycross debut. “We’re looking at options for next year right now. This has been a brilliant experience for my development as a driver and also great fun. It’s a shame the weather was so wet this morning, it probably made it a bit harder to get used to things, but I’m really pleased. Everybody from the Peter Gwynne team and all the mechanics to the other drivers and the organisers have been great. It’s been a superb experience. Rallycross is really starting to get big now, even Jenson Button is talking about doing it! It’s still definitely something on our radar for the future”. 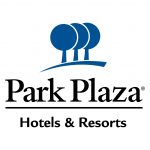 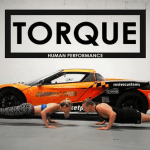