In the middle weekend of his trio of back to back visits to Nurburgring, Ben Tuck displayed his prowess in defensive driving to bring home his Walkenhorst Motorsport run BMW M4 GT4 to a pair of top 5 finishes. For the second weekend in a row Ben was locked in an epic battle with rival Mercedes AMG’s to hold onto 3rd in the Championship after 8 races with 4 to go.

Against the background of regulation changes governing the power available to the competitors, Ben’s weekend got underway in warm and sunny conditions at the famous German circuit. Based upon last week’s experience, and this time on a slightly shorter layout of the Nurburgring track, the action was expected to be close. Ben’s team had used their experience wisely to refine an improved setup and as the flag fell to conclude the 20-minute qualifying session for Race #1, Ben had done enough for 4th on the grid.

Race #1 started with an almost immediate safety car to deal with a car fire on the start line, neutralising Ben’s efforts to take early positions. At the restart Ben was able to take the fight the cars ahead, but a chasing Mercedes resulted in a thrilling battle requiring Ben to simultaneously fight to take a position whilst defending from behind. As the leaders broke away, Ben was eventually forced into conceding the position. From then on, he drove a consistent race to bring the car home in 5th place.

Race day #2 dawned under similar conditions and an equally strong qualifying performance saw Ben again maximise the performance of his M4, finding another 4th place grid slot as the fastest BMW. In a repeat of the previous days race, Ben found himself defending from the Mercedes cars, the differing strengths and weaknesses of each type providing a classic inter-marque battle. However, Ben put in a masterclass of defensive driving to keep the Mercedes at bay to hold the place. The resulting 4th position was another hard-won result and one that Ben accepted with relief: “We managed to hold position today, but it was another extremely tough one keeping a Mercedes behind me for the entire race. I’m really happy for the team that we were the best BMW again today, it was a great job by my race engineer Jörg Müller and Walkenhorst all weekend, as well as support from BMW Motorsport.  It does show that changes need to be made to rebalance the performance between the cars again”

The results this weekend consolidated Ben’s 3rd position in the championship. He and the team will be moving on to the next round of the DTM Trophy at Zolder in 4 weeks’ time with a sense of determination. In the meantime, Ben will be finishing off his run of races at Nurburgring by taking part in his second appearance at the legendary 24 hour of Nurburgring next weekend, having taken a podium on his debut in 2019. 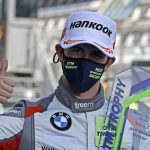 ANOTHER PODIUM FOR TUCK IN MIXED FORTUNES AT NURBURGRINGRace Reports 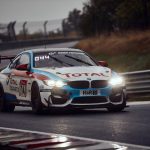